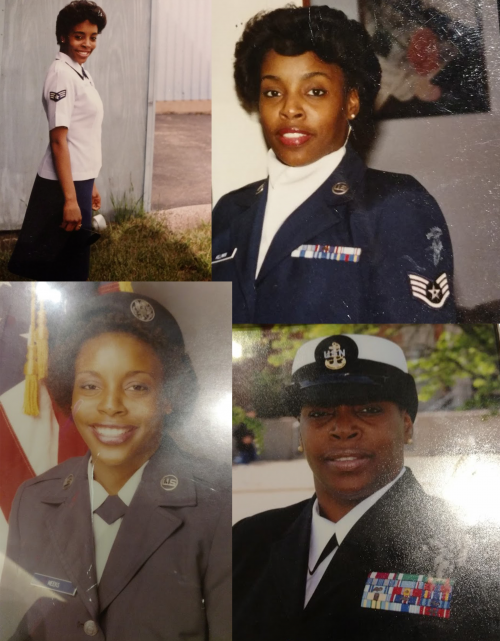 You may know Tanya Hellams as one of the Human Resources Development Specialist in the Enterprise Training Division.  But did you know Tanya is a Veteran of both the U.S. Air Force and Navy?  Here is her story.

Tanya enlisted into the U.S. Air Force in December 1982 after her parents told her they were not paying for her to receive C’s at an out of state college. The Air Force was not her first option, she initially went to see a Navy recruiter and was told they had met their quota for enlisting African Americans that Fiscal Year. Astonished with that response, she walked across the hall and the Air Force asked when did she want to leave?

Her parents were not a fan of this decision. Tanya was the first woman in her entire family to join the military, but in their minds, nice girls do not join the service. Undeterred, Tanya selected her job, 645X0, Inventory Management Specialist, and off to Lackland Air Force base she went.

After boot camp Tanya was sent to Lowry Air Training Force Base in Aurora CO, for technical training. Her first duty assignment was Kadena Air Base in Okinawa, Japan. Tanya loved her job, the Air Force, and her duty station so much that she extended for another six months. She was sent on temporary duty to Howard Air Base in Guam, Clark Air Base in the Philippines, Hickam Air Base in Hawaii and participated in the Team Spirit exercise in Osan, Korea. It is safe to say that she saw all of the Pacific theater while in the Air Force.

Tanya obtained Senior Airman six months early, was the Pacific Air Force Airman of the year, and was nominated as one of the 12 Outstanding Airman of the Year. As an Airman First Class, she received an Air Force Achievement Medal for creating the Dirt Dozen Team Building exercise which raised over $5,000. This program is still in existence today in the 18th Service Squadron at Kadena Air Base.

Tanya graduated from Leadership School with honors and was selected by her classmates as the most distinguished graduate and class leader. Tanya also received multiple monetary incentive awards identifying supply items that were miscoded and were costing the Air Force untold resources. If you ask her what motivated, she will say it was not about the monetary award but about being diligent in her duties and checking the paperwork. Her meticulousness and attention to detail is what got her recognized for so many awards early in her career.

Upon arriving at Travis Air Force Base she was assigned to 90th Military Airlift Wing under a tenured Chief Master Sergeant who liked to inappropriately touch his subordinates. When she complained about his behavior, Staff Sergeant Hellams was moved to night shift and told, he was a Chief and untouchable.  It was easier if they moved her.

At the end of that assignment, June 1986, Tanya separated from active duty. After about six months of missing the comradery and the structure, she enlisted into the Air Force Reserves at O’Hare Air Reserve Base in Chicago IL.  Tanya was promoted to the Chief of Supply in 1994. She stayed in the Air Force Reserves until the Base Realignment and Closure (BRAC) came calling.  In May 1997 the 928th was deactivated and Tanya worked hard to find assignments for her 60 staff members Air Force wide. While at the 928th Tanya functioned as the full time person for her unit and worked the Friday before the Unit Training Assembly, the day after, and the Air National Guard weekend ensuring all of the training schedules, annual tour requirements, pay, and promotion orders were taken care of.  During the time of BRAC all promotions were frozen, thus Tanya’s promotion to Senior Master Sergeant was put on hold. In order for her to obtain the promotion she would have to transfer to Wright Patterson Air Force Base in Dayton OH, Lackland Air Force Base TX, or back to Travis Air Force Base CA. none of those were viable options as she had small children.

She went to see an Army National Guard recruiter in her building and realized the Army way of life was not a good fit. According to her husband, ‘she punked out’. So, back to the Navy she went and was told she could come over as a direct conversion and the transfer was completed. May 1997, Tanya reported to the Forest Park Reserve Center assigned to the Naval Weapons Station Yorktown, VA. She was essential in closing that base and then re-assigned to Naval Support Attachment Naples, Italy. The Navy Non-Prior Service Training Program had just come online and Tanya was selected to manage the program for Forest Park with her team of seven First Class Petty Officers in many different rates.

After September 11th, 2001 Tanya was recalled to do her job not as a Chief Storekeeper but as a Funeral Honors Program Manager. She was assigned as the Casualty Assistance Calls Officer assigning funeral details to over four thousand fallen Navy enlisted and officers within the Chicagoland area and northwest Indiana.  In Tanya’s civilian capacity as the field trainer for the State of Illinois Department of Veterans Affairs, her skills and knowledge enabled her to ensure all benefits were applied for on behalf of the Veteran, his/her widow and his/her orphan. During her time in the Navy Tanya performed duty assignments in her home base of Naples Italy, a tour in London England, Pearl Harbor HI, Naval Station Mayport, Jacksonville FL, Naval War College, Newport RI, and Great Lakes Naval Station IL.   Tanya’s retirement in May 2006 was the last retirement ceremony held at the Forest Park Reserve Center as the entire command was relocated to Great Lakes Naval Station IL.

If you ask her why 23 years, 8 months and 29 days, she will tell you she loved her job, the relationships that are still in effect, the mission, and the sense of accomplishment. The order and discipline that the military brings, the sense of responsibility at an early age, and the training that helps you succeed as a leader. Chief Hellams still mentors airmen and sailors in retirement. Her belief in that respect is earned and she would rather be respected than liked, is her battle cry. After changing uniforms and coming full circle in the very branch that said no thank you, she would do it all over again. Tanya will tell you that you chose the attitude you want and she chooses to have one that says I can, and she has.

Tanya is currently one of the Human Resources Development Specialist in the Enterprise Training Division. Tanya arrived at the PTO July 2014 to manage the New Employee Orientation (NEO) program. Now she still manages NEO along with the Administrative Professionals Excellence (APEX) program and teaches Crucial Conversations and other classes as requested.  Tanya worked at the United States Department of Veterans Affairs at Hines VA Hospital from March 2008 as an Education Training Specialist managing the NEO program, Hines Leadership Development program, was the Mentor/Coach Train the Trainer for VISN (Veteran Integrated Service Network) 12, Franklin Covey and Crucial Conversations certified facilitator until leaving in July 2014.   Tanya received her 15-year service pin last year and is looking forward to retirement in seven years. What will she do after this retirement?  She plans on more traveling and collegiate instruction to keep her busy. Tanya will tell you that if she can have a positive effect on one person in any of her classes or that may cross her path, she feels accomplished. Tanya is married to a retired Army soldier, has five kids, and four granddaughters.