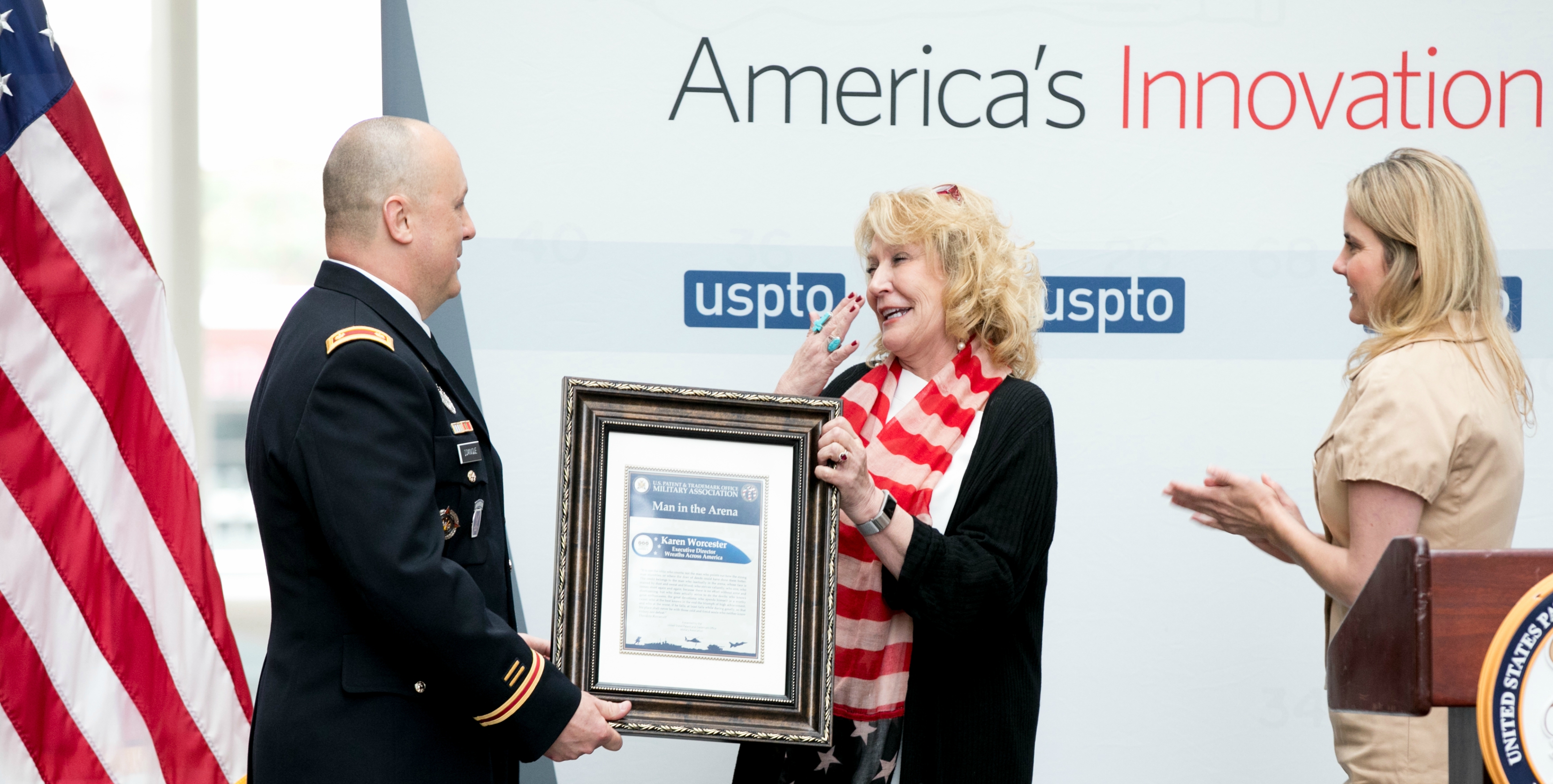 Reprinted from the Wreaths Across America Blog.

On May 23, Wreaths Across America executive director Karen Worcester was honored to accept the “Man in the Arena” award from the United States Patent and Trademark Office Military Association (UMA) at its annual Memorial Day tribute in Alexandria, Virginia.

The award was inspired by and named after, a famous speech by President Theodore Roosevelt. In this speech, Roosevelt hailed those who take on both the possibility of great success and also the risk of failure, by being the “man in the arena:”

“It is not the critic who counts; not the man who points out how the strong man stumbles, or where the doer of deeds could have done them better. The credit belongs to the man who is actually in the arena, whose face is marred by dust and sweat and blood; who strives valiantly; who errs, who comes short again and again, because there is no effort without error and shortcoming; but who does actually strive to do the deeds; who knows great enthusiasms, the great devotions; who spends himself in a worthy cause; who at the best knows in the end the triumph of high achievement, and who at the worst, if he fails, at least fails while daring greatly, so that his place shall never be with those cold and timid souls who neither know victory nor defeat.”

The UMA, a registered non-profit that was started by a group of veterans at the U.S. Patent and Trademark Office and is now open to everyone, presents this award to those who have displayed great courage, skill or tenacity. Past recipients include astronaut Buzz Aldrin, Congressman Steve Russell, and Brigadier General William Weise.

In her keynote address, Karen Worcester thanked the UMA for the honor and shared a personal story of why Wreaths Across America does what it does. In a heartfelt and often tearful delivery, Karen told the story of Edith Knowles, a Gold Star Sister who lost her brother, Bud, during World War II. Edith never forgot the sacrifice her brother made and wanted to keep his memory alive.

Several years ago, Edith participated in Wreaths Across America and brought along a life-size cutout of Bud with her. Along the way, she shared her brother’s story with school children and really brought home the idea that real people—who have good lives and a lot to lose—choose to fight and die for our freedom. This story perfectly explains why Wreaths Across America exists. We are here to keep the memory of fallen soldiers, like Bud, alive, to honor those who serve, and perhaps most importantly, to teach children the value of freedom.